There are more than 7 billion people in the world. Half of those are male, and about 1/7 of them my age. Meaning a bunch of about 500.000.000 is left. Start finding Mister Right. Continuing with numbers, say you can meet about 50.000 in a lifetime, you need to live 10.000 lives to meet every single one of them, and consequently, be sure there is no better one out there. Apparently, a classical mathematical problem that can be solved with a simple formula.

We start with the theory of optimal stopping. Let me get all this mathematical stuff right and quote Wikipedia: ‘’The theory of optimal stopping is concerned with the problem of choosing a time to take a particular action, in order to maximize an expected reward or minimize an expected cost’’. So, when is the ideal, optimal time to stop. From here on we move on to the most well-known optimal stopping problem, the secretary problem. You want to hire a secretary, and of course, you want the best out there. You have a number of applicants, let say a 100. All of them are interviewed, in random-order, but here is the trick. After each interview you have to decide whether you hire or reject the applicant, and there is no way back or changing your mind later. And no way to see what is still coming. How can you maximize the probability of selecting the best? The formula. According to the optimal stopping rule, you will interview the first 37 and rejected those. Remember who was the best in that 37. Now you pick the first one that is better than the best one out of the 37. It could be number 38, but also 56 or 99. How it works, I’m not completely sure, but this way, 37% percent of the time you select the best candidate. 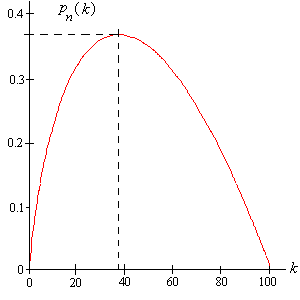 But now to dating. Although the secretary problem is also referred to as the marriage problem, I think we can see some problems here. When hiring, we might know the number of candidates, in dating life, we do not. More so, dating 37 (if we’re basis our total sample of 100, which we have seen is also not covering the lot) to begin with and go on, it’s quite the challenge. According to Peter Todd, academic in the field of cognitive science and social psychology, you therefore might not want to find the one, but one of the best. So, we take magic number 12. After some calculating, it seems checking 12 potential mates does the trick. You’ll then end up with the top 10% mates 77% of the time. If you’re a little less critical, and the top 25% will do, you have a 90% success rate. Another mathematician, Dr. Clio Cresswell, spinned this nicely to the 12 bonk rule. Date 12 people, reject all, and then pick the next best that comes after, she says, results in 75% chance of a successful relationship. By naming the theory ‘bonking’, Cresswell implies with the bonk rule that those 12 have to be sex partners, however, others leave in the middle whether these 12 should be dates, sexual encounters or actual relationships. I leave it up to you.

Todd’s chance of finding a mate

The question might arise, are we even looking for the one and only Mr Right? I consider myself quite the romantic, but the notion of one person to be the perfect match is not one I believe in, and with me probably many others do not. ‘’What if he is number 7?’’ The question emerges, what if you meet someone within those first 12? Are you going to let it go by because there might be someone better out there? Probably not. Theory and practice are never the same. But I have to admit, the idea is interesting. Finding out what’s out there is never wrong. What do you like in a person, what don’t you, learning from past experiences, it might all help to make you find someone that is in that top ten percent. Cresswell compares it to car shopping, if you’re buying a new car, you’ll also put some research into it. Worthwhile to experiment. I’ll keep you guys updated.