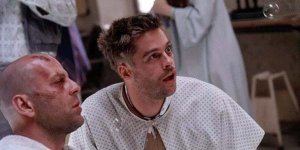 When I was nine years old, I watched Terry Gilliam’s “12 Monkeys” for the first time in my life. I was hooked – the character of James Cole (Bruce Willis) – the suffering time traveler – was enough to make it my favorite movie. Almost 20 years after its release, it still is. What makes it so unique in my opinion is the simplicity of the settings, the strong characters, the philosophy behind it and of course – a powerful ending. I despise the contemporary firework shows that call themselves sci-fi only because they have laser guns or giant robots. For me, the magic of science fictions lays in the ability of the film to communicate an amazing and grasping idea – in a realist and modest way. Here are a few that do it very good, but are mostly unknown to most of us.

What’s the deal – A bunch of garage engineers, trying to come up with an invention that will let them go on an early pension. Instead, they invent a time machine that will complicate their lives.

Why is it awesome – starring, written and directed by Shane Carruth, this film is as minimalist as you can get. The professional, moral and personal decisions one has to face in such an extreme situation are presented in a realistic way. It portrays true friendships with genuine dialogues, and challenges the viewer along with the characters. In a nutshell, any movie that has its own infographic on Wikipedia only to explain the plot – has to be a badass sci-fi.

What’s the deal – a young journalist convinces his girlfriend to join what seems to be a cult, as a research for a story. The woman who leads these meetings (Brit Marling), claim to be from the future, and the couple struggles to find the truth as they get pulled deeper and deeper into the dubious group.

Why is it awesome – filmed almost only in one location, this film grasps you from beginning to an end. No time machine, no aliens – just simple people and their longing for something out of this world.  Is it the touch of Zal Batmanglij or the charm of Brit Marling that makes all their movies so mesmerizing?

What’s the deal – Sam Bell (Sam Rockwell) is the only man living on the moon, in charge of operating large machinery for mining resources. When an accident happens, Sam is faced with a surreal and intriguing situation.

Why is it awesome – one actor, one planet, one space station. The philosophical idea in the film is what makes it so addictive, especially when it carried out by Sam Rockwell in a brilliant way. But the real treat is Kevin Spacey as the voice of GERTY, a contemporary take on the creepy, possibly self-aware robot.

What’s the deal – a planet appears in the sky. Apparently, it’s an exact replica of our own earth. Rhoda Williams (Brit Marling), affected by a tragic event, tries to win a ticket to Earth 2, hoping to deal with the complexity of life.

Why is it awesome – this is by no means an ordinary sci-fi flick. It is dreamy, surreal and sensitive. But above all, it’s a personal story, told in the midst of great change, or maybe it’s all just an allegory? Again, the charm of Marling and the world created by Batmanglij makes it easy – and fun – to swallow.

What’s the deal – good question. Nemo is the last mortal person on the planet. All the rest have eternal life due to technology. He tells his story, which takes us to a journey into the fundamentals of human existence.

Why is it awesome – chaos theory, eternity, immortality, parallel universes, time travel, endlessness of possibilities, the power of memories – it’s all there. In his first English speaking film, Belgian director Jaco Van Dormael is not afraid to tell a big, complex and inspiring story, with a visual and emotional celebration of the human mind.

What’s the deal – the oldie of this list tells the story of Vincent Freeman (Ethan Hawk), an inferior man in a world divided to classes based on DNA. He steals the identity of an upper class man in order to join a journey to space.

Why is it awesome – clean and simple settings allow the story to be both believable and disturbing, examining the risks of DNA research, and the basics of classes in a future society – and in our own society. And on top of all that, we get Uma Thurman in one of her career highs.

What’s the deal – in 1997, an ad in a magazine is published, calling for a companion for time travel. A team of journalists set out to investigate the case, and react differently to Kenneth (Mark Duplass) as he prepares to travel through time.

Why is it awesome – this is definitely an exception to this list. It’s a light headed film, not taking itself too seriously. More than its time travel content, this is a film about imagination, loneliness, love and the power to believe. But no worries – there is a time machine.