Did you know that Superman, the most famous comic book icon, was created by a teenager? Jerry Siegel was only fourteen years old when he got the idea of creating Superman. I have been reading comic books since a very young age, and I always wondered ‘where do the stories come from?’ It is said that in one day, our brain produces as many as 50,000 thoughts. Fiction or reality, all our thoughts are based on human activity based on mundane things such as relationships, fears, wishes… Images of our daily life unfold in front of us, feed our imagination and this enables us not only to dream but also to create stories. Today, I am going to talk about comic books and about the processes of creation and imagination in stories, myths and comic books. 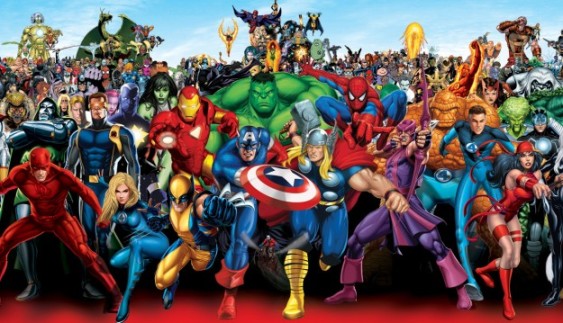 ‘In a Wonderland they lie Dreaming as the days go by’ Lewis Carroll, Alice in Wonderland

How could a teenager, Jerry Siegel come up with the mythic character Superman? Well, if we take a closer look at the story of Superman, we can actually realise that the story is based on Greek mythology and more specifically on the story of Hercules.

Myths have existed for as long as there has been human communication. The term ‘myths’ actually comes from the Greek word ‘mythos’ which means ‘story’. Both stories of Superman and Hercules underline many similarities, they both recount the adventures of a hero, but not just any kind of hero. Superman, just like Hercules, was born an extra-terrestrial, and in fear of disaster striking upon his planet, Superman’s biological father Jor-El decides to put him in a shuttle towards Earth. Superman is then found and adopted by a couple : the Kents. This is how he becomes Clark Kent. Struggling to find his identity, Superman ressembles in many ways to Hercules. In both stories we follow a half-man/half-god hero in his quest for identity. But then again, isn’t that what all myths talk about ? The story of a hero, the nature of his weakness, the obstacles he has to overcome, and the defeat of the villains.

Story-telling and comic-strip drawing can be said to reflect the mere imagination of an author or an artist when actually basic themes or plots continually recur in many stories. They might evolve a little, but the main plot still remains. Christopher Booker says there are seven basic plots that become recurrent story patterns. He believes it is almost impossible for any storyteller to break away from these. It becomes kind of a universal language. I found this very deceiving at first. I mean imagination and creativity is about thinking outside of box. But think about it, we will always be enclosed in a bigger one.

To cut the story short, stories will of course evolve with time, but the core plot will never be 100% original. This is because all imagination is based on reality.. Even in mythology or in comic books where heroes have extraordinary powers, the stories are not entirely fiction. Patterns of events and figures persist because they represent and embody the expression of human behaviour. We cannot create something out of nothing.